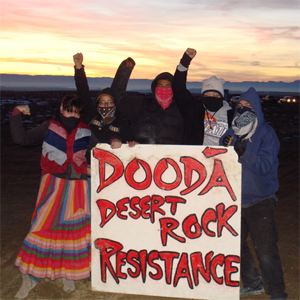 By temple? In late 2006, drilling for the environmental impact statement of a massive new coal-fired power plant began on Diné elder Alice Gilmore’s grazing land near Burnham, New Mexico. The drilling started without Gilmore’s knowledge or consent, and company workers and police refused her requests to see permits. Two weeks later, on December 12, Diné elders and youth set up a blockade on an access road to the drilling site. Restraining orders were served shortly after, and protesters were forced to a different location, which has now become a permanent protest camp.

Diné Power Authority (DPA) and Sithe Global are behind the proposed 15,000 megawatt plant. Two other coal-fired plants, Four Corners and San Juan, are within a 20 mile radius and already send a cloud of brown smog over the northern horizon. If Desert Rock is built, it would send an additional 10.5 million tons of greenhouse gases into the atmosphere per year, including carbon dioxide, nitrogen oxide, sulfur oxide and mercury. This would increase New Mexico’s net emissions by 16 percent.

Sithe claims the plant and the nearby strip mine will bring 1,000 temporary construction jobs and 400 permanent jobs. But who will be working these jobs? It will not likely be residents of the Burnham area. This is not just an environmental issue, but an example of ongoing cultural genocide that the US and its business interests have been waging against native peoples for centuries. The proposed 580-acre construction site currently contains homes, ancestral burial sites, sacred prayer locations, farmland and grazing lands. The overwhelming majority of the power produced by existing plants is exported to huge cities, such as Phoenix and Las Vegas. The power will not be sold to California because it does not meet the state’s clean energy standards. All the while, many residents in rural areas of the reservation live without electricity or running water.

On January 20, the resisters moved their camp back to its original site, where they have been their under 24-hour police surveillance. Support is still needed! Food, money and firewood are helpful, and people presence is important!

temple? would like to give mad props and much love to the Fresno crew.