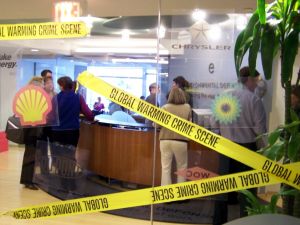 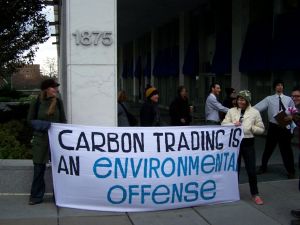 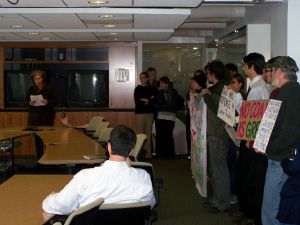 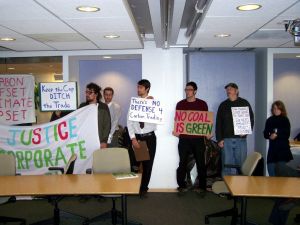 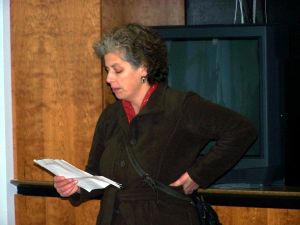 Rising Tide action at the DC offices of Environmental Defense

Rising Tide North America As the UN Framework Convention on Climate Change opened on 1 December 2008 in Poznan, Poland, grassroots climate activists took over the Washington DC office of Environmental Defense. The activists stated that they had targeted ED, one of the largest environmental organizations in the world, because of the organization's key role in promoting the discredited approach of carbon trading as a solution to climate change.

Dr. Rachel Smolker of Global Justice Ecology Project and Global Forest Coalition read a statement, which said in part, "My father was one of the founders of this organization, which sadly I am now ashamed of. The Kyoto Protocol, the European Emissions Trading Scheme and virtually every other initiative for reducing emissions have adopted their market approaches. So far they have utterly failed, serving only to provide huge profits to the world's most polluting industries. Instead of protecting the environment, ED now seems primarily concerned with protecting corporate bottom lines. I can hear my father rolling over in his grave."

The activists rearranged furniture in the office, illustrating how marketing carbon is "like rearranging the deck chairs on the Titanic." Others held signs reading "Keep the cap, ditch the trade" and "Carbon trading is an environmental offense."

Leo Cerda, an indigenous activist with Rising Tide Ecuador said, "ED wants to turn the atmosphere and forests into private property, and then give it away to the most polluting industries in the form of pollution allowances that can be bought and sold. Not only is this an ineffective way to control emissions, it is also a disaster for the poor and indigenous peoples who are not party to these markets and are most impacted by climate change."

ED has been key in establishing the U.S. Climate Action Partnership, a business consortium advocating for a cap and trade system with extremely weak emissions reductions. US CAP allows polluters like Duke Energy, Shell, BP, DuPont, and Dow Chemical to claim they are green while continuing with business as usual. In recognition, activists awarded ED the "Corporate Greenwash Award," a three foot tall green paintbrush. "We think this award is appropriate since Environmental Defense spends more time painting polluters green than actually defending the environment," said Matt Wallace of Rising Tide North America.

Opposition to carbon trading is growing as it becomes apparent that market based schemes do little to fight climate change while helping corporations rake in profits. Earlier this year, over 50 groups came together in the US to denounce carbon trading in a Declaration Against the Use of Carbon Trading Schemes to Address Climate Change. Globally, hundreds of environmental, social justice, and indigenous groups have come together to oppose such market based initiatives as inherently unsustainable and ineffective in creating a just transition away from fossil fuels.